Bernice
As a senior woman who likes to cozy up to read a good book, I also don't let grass grow under my feet. I've had a career as a manager in the software and computer industry and lived in both the United States and Europe. I have caught trophy trout, bred and shown national champion show horses, played the piano in governor's mansions, and assisted others in researching their lineage and family histories. I am the go-to person to give recommendations to live an exciting life, whether it is imaginary on the page or in real life under the sun. 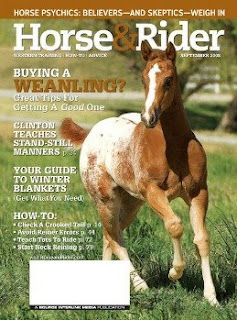 One of my fillies made the September 2008 front cover of Horse and Rider magazine. This 2008 filly is by MAID DIGNIFIED and out of ONE RICH MAMA. ONE RICH MAMA is a great mare. She is an ApHC Champion, ApHC Versatility Champion and a bronze medallion winner. One of her daughters, VISIONS TO GO, is the dam of the 2008 Natonal Champion Weanling Gelding, MD RICH AND FAMOUS.

From the Appaloosa Horse Club blog at http://appaloosablogspot.com/2008/08/27/appaloosa-cover-girl/#comments, the following was noted:

It’s always a pleasant bonus when an Appaloosa makes the cover of someone else’s magazine. In this case, the September issue of Horse & Rider provides the stage and the spotlight. The star cover girl is a filly sired by Maid Dignified and owned by Bernice Schroer of Carson City, Nevada. The photo is by Gail Bates.

Our own local celebrity Juli Thorson, H&R Lifestyle Editor, says it’s been quite a while since an Appaloosa made the cover of the mag. The feature story is by Robin Gollehon, a member of Team Horse & Rider, who discussed how to evaluate a weanling that you’ve bred or are thinking of buying. Most of you know Robin as an active participant in ApHC events at the national and even global levels.

1. Richard Lankford Said,
August 28, 2008 @ 7:11 am
It’s great to have an Appaloosa on the cover of Horse & Rider.Another way to promote the Appaloosa horse and the ApHC.
2. Diane E Said,
September 2, 2008 @ 4:04 pm
I agree, this is good for our breed. I’d also like to say that the cover of this month’s AJ is absolutely great, and I also like the fact that the photo is on the home page of the Club’s website. That one photo says it all–why our breed and club can be so wonderful.
Posted by Bernice at 9:54 PM No comments: